Bandojo led a STEAM education project in which teams of high-school students designed and built artful controller interfaces to the Bandojo music software. As the culminating week of a 4-week STEM camp produced by UNM’s School of Engineering, the 35 students, divided into five teams, constructed their own Bandojo Touch Boards with themes ranging from Outer Space to PacMan Arcade Game to Medieval King’s Table.

Each controller was an interactive engineering system integrating software, electronics, physical structures, audio synthesis, and art. The Bandojo project built upon engineering skills that the students had learned earlier in the camp, including soldering, electronics, Arduino programming, and working as a team. It introduced new technologies, such as capacitive touch sensing and audio synthesis, and required the components built by the students to interface with powerful provided components in order to produce a unified system. It scaled up the scope and complexity asked of the students, and gave them a taste of being a practicing engineer. 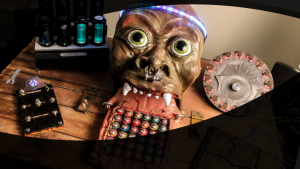